Trillion tons of water is being pulled by Earth's Interior

A+ A-
Print Email

The Earth is pulling trillions of tons of water into its interior as a result of tectonic plates collide underneath the ocean, a recent study has revealed using ocean-bottom seismographs.
Calculations show around 3 billion teragrams of water will be absorbed every million years by earth's interior. Researchers also studied data from seven island-based seismographs.19 passive seismographs across the Mariana Trench collected rumblings over a period of one year which used by the researchers.
It will allow the scientist to get a clearer view of this phenomenon such as how the Pacific plate bends into the trench, unmasking new insight on how the rocks hold water deep inside the surface. 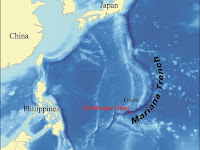 According to the researchers, the extreme temperature and pressure cause water to become trapped in the rock as the tectonic plates segregate into the earth's crust and upper mantle along the lines of fault. 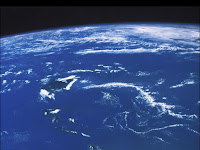 It was known earlier that the subducting place can hold water but researchers unable to find a clear picture of how much this amount up to, or how much deep it can go.

what exactly happens to the water which is pulled down by the Trench remains hazy. Scientists thought that most of the pulled water somehow returns to the atmosphere as water vapor through volcanic eruptions.
By Satish Singh
Labels: Earth, Science, Technology