A+ A-
Print Email
The dream of millions are going to be fulfilled.

Billionaire Elon Musk-led aerospace startup SpaceX has signed the world's first Private passenger to fly around the moon abroad it's BFR launch vehicle now Starship. Only 24 humans have been to the moon of which 12 set foot on the moon, with the last manned mission, being 46 years ago.
This topic was on hipe in November 2018, after renaming Big Falcon Rocket (BFR) to Starship back then the project is soon going to be a dream come true project costing around $5 billion. 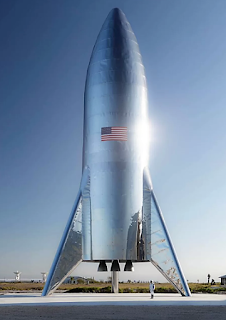 It was also believed that when this will start its actual journey could hold up to a hundred passengers or could be used for transit Cargo weighing hundreds of tons to Mars and Back.
When this news goes on air every photo artist rendered lots of imaginary graphics to illustrate this Vehicle for people who had wondered how the spacecraft will look like after its completion but now  Everything right in front of your display. Looks cool and futuristic right!
At Boca Chica, Texas this Starship currently being assembled and it will look even cooler than its prototype. But for now, this prototype is enough to give the onlooker a solid taste of its futuristic big brother. This little brother lacks some window and actual height from the actual production.
For your information, this prototype also serves its purpose and could be used as the First Launch vehicle. The finished design also looks similar and even better, with some Upgrades i.e windows. When it will finish its gain a height of 30 feet or 9.14 Meter.
Testing will be sometimes in March 2019. Finally, We can imagine what the big machine will look like when it will be ready.
By Unknown
Labels: Space, Technology